The most common form of hair loss affecting both men and women, although more commonly seen in men.

In women, this type of hair loss results in an overall thinning of the hair. It typically begins as a diffuse (i.e. not localised or patchy) thinning at the crown, but with time becomes more pronounced to include most of the top of the head. 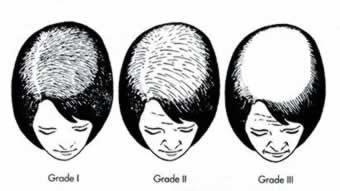 Unlike the male pattern, most of the time female hair loss will stop behind the hairline.

Genetic hair loss usually begins during the mid to late 20's, but can occur at any time with a variety of triggers.

Changes in hormonal balance affect the hair follicle and lead to hair loss. This is due to something called DHT toxicity (DHT is a by-product of the hormone testosterone).

Whilst medical science still searches for an effective solution, at the moment little can be done to prevent the progression of female pattern hair loss or androgenetic alopecia as it's "in the genes".

Minoxidil is a drug which, in some cases, can slow the process of hair loss or lessen the severity in some sufferers. Other forms of medication are called anti-androgens and these drugs work against the formation of DHT and there is some research to suggest they can be effective in women.


How we can help

The first step, of course, is to ensure the condition is properly diagnosed by your doctor or consultant so you can be sure that nothing else is causing your hair loss.

Our Kinsey System for female hair loss is, in most cases, a perfect cosmetic solution for female androgenetic alopecia and we've successfully worked on thousands of clients with the condition.

We can advise accordingly during a free consultation at our London studio.

"For years I'd been unable to go out in the rain, wind or snow without worrying about my scalp suddenly being exposed.  Since going to Mark Glenn, in the past seven months I've done things I never thought I would - swimming, skiing, scuba diving... "

"For those in the know, Mark Glenn are their best kept secret. "

"When my husband met me at the airport, he nearly walked past me.  My hair was so fantastic that I looked a good ten years younger than when I'd left home that morning. "

"I feel elation at being liberated from wearing a wig, and to know that I'm not going to have to wear one ever again - it's just wonderful and makes me feel feminine again. "

"Mark Glenn's innovative work has transformed the lives of thousands of women who suffer from varying degrees of hair loss... "

News of the World

"The result at Mark Glenn is extremely convincing... "